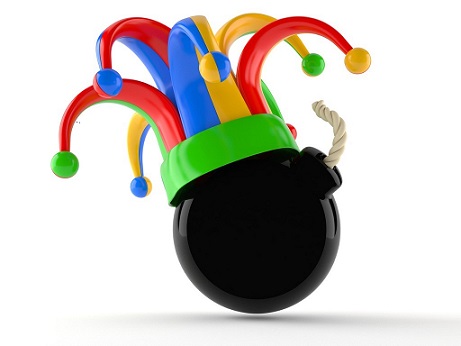 Slowing global growth, an escalating trade war, emerging-market political risk and a less-accommodative-than-anticipated Federal Reserve (Fed) have conspired to generate a sharp pullback in the price of riskier investments. This has led to an unprecedented global bond rally as investors have sold out of stocks and searched for safety.

Recently, SEI Private Trust released a Research Commentary entitled, “Hawks, Doves and Greater Fools,” which we thought would be of interest. A summary of the conclusions is provided below:

Exhibit 1 shows that the yields on global government bonds (the most conservative/the least risky investments) have raced lower as buyers have driven up prices (yields move lower when prices move higher).

In the past month, yields on bonds issued by the governments of Canada, France, Germany, Italy, Japan, the U.K. and the U.S. (collectively referred to as the G7 countries) fell by an average of 35 basis points in just the last month. This is a truly large move by bond-market standards. U.S. Treasurys have embraced their role as the ultimate perceived safe-haven assets, leading the move lower with yields on 10-year Treasurys sliding by more than 50 basis points. 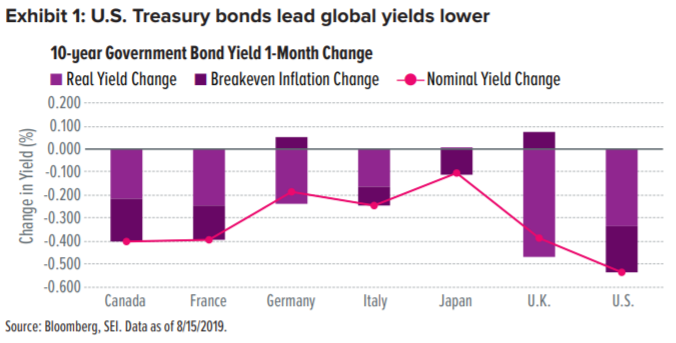 Further indication that animal spirits in the investment world have shifted to pessimistic extremes is the “lower yields forever” mentality that has taken hold. This is reflected in the sharp flattening of global yield curves as long-term interest rates have tumbled. In the U.S., we witnessed this as the 10-year/2-year Treasury yield curve inverted. For the first time since 2006, investors could earn a higher yield on a two-year investment than they could by locking their money up for a decade. We also saw a new record-low yield (1.95%) set for the 30-year Treasury bond.

The sharp repricing across global assets suggests that investors believe central banks will continue to take a dovish stance by buying bonds, cutting interest rates and taking other steps to provide economic stimulus. Yet we are skeptical, as to whether or not there is enough monetary dry powder to get us through the next cyclical economic downturn. The latest actions by the U.S. Federal Open Market Committee (FOMC) underscores these concerns.

At the July FOMC meeting, the federal funds rate (the interest rate banks pay when making overnight loans to other financial institutions) was cut for the first time since 2008. The 25 basis-point cut was largely in line with market expectations. But the Fed’s messaging during the post-meeting press conference was hawkish—in other words, less accommodative than anticipated. Fed Chairman Jerome Powell characterized the rate cut as a mid-cycle adjustment, rather than the start of a lengthy cutting cycle. Investors didn’t like the tone of that message. In response, riskier investments sharply sold off and investors bought U.S. Treasury bonds—a clear indication that markets viewed this as a policy mistake. This initial move was quickly amplified as an unexpected escalation in U.S./China trade war rocked global markets.

Prior to the FOMC’s July meeting, bond prices showed that investors expected a yearend federal funds rate of 1.85% (roughly equal to two expected cuts in 2019). Post meeting, markets quickly re-priced to a year-end expected federal funds rate of 1.45%, or about three total cuts for the year (Exhibit 3). Thus, markets have completely rejected the Fed’s hawkish stance and have priced in a full additional cut by year-end.

Given that the federal funds rate topped out at just 2.5%, the Fed only has a total of nine 25-basis point cuts at its disposal before rates hit the lower bound of 0%. The irony is that the Fed essentially neutralized its first cut with its disappointing messaging. Given the limited capacity to cut rates, this may come back to haunt the central bank.

The recent drop in yields has resulted in $16 trillion dollars’ worth of negative-yielding debt worldwide. Negative yields run counter to all economic intuition. The only way for non-currency-hedged local investors (in other words, most citizens in most countries) to break even—let alone earn a positive return—is to sell the bonds for a higher price than what they themselves paid for them.

Economists call this the Greater Fool approach. This theory states that an investor can profit from buying securities (no matter how overvalued) simply because there will always be someone (the bigger fool) willing to pay an even higher price for them down the road.

History is littered with cautionary tales of this approach—think of the dotcom bubble or the U.S. housing bubble. The major difference this time around is that the greater fools in the bond market are global central banks. The four largest central banks (Fed, European Central Bank, Bank of Japan and Bank of China) have purchased close to a collective $20 trillion in debt (Exhibit 4).

Central banks have a completely price-insensitive economic objective. They buy in hopes of stimulating economic activity, not to generate investment returns. As long as the quantitative-easing floodgates remain open, it’s not a stretch to expect that someone (a central bank) will buy your bonds back at a higher price.

Our point of view

Previously, we said that if conditions deteriorated, to a degree, that required an interest rate cut, we believed that the 10-year Treasury would trade down in the 1.50% to 1.75% range. The post-FOMC rally has quickly driven markets to the lower end of our expected range. Given the velocity and magnitude of that rally, we think the market will likely consolidate in this range as we await further clarity on both the trade-war and monetary policy fronts.

The trade war remains a fluid situation with little chance of near-term resolution. At the Fed's annual Jackson Hole symposium, Fed Chairman Powell reiterated the central bank's commitment to supporting the economy. While acknowledging geopolitical turbulence, he did not commit to making deep rate cuts. Beyond this, we have scheduled policy meetings for the European Central Bank, the Fed and Bank of Japan on September 12, 18 and 19, respectively. Given the elevated downside risk, the sharp tightening of financial conditions and limited monetary capacity, there is a clear impetus for global central banks to collectively deliver a dovish message to markets. If central banks fail to deliver (or if there is further trade-war escalation), the rally is likely to extend with scope for the 10-year Treasury to test its all-time low yield of 1.35%.

Aside from the aforementioned risk, we believe the relative yield advantage of Treasurys makes them more attractive than global government bonds—over half of which now offer a negative yield. Treasurys account for 65% of all outstanding government bonds that offer a positive yield. Given that they account for only 30% of total market value, Treasurys are punching well above their weight in terms of yield contribution. Facing this dearth of positive-yielding assets, the U.S. bond market should remain attractive to foreign flows, which should keep prices high and yields low.

We think the 1.50% to 1.75% 10-year Treasury yield range will likely hold in the near term. However, we see the risks as skewed to favoring lower yields.

To learn more about our distinctive goals-based approach to life and wealth management or request a copy of the full-length paper, please do not hesitate to contact our team directly.

Now in its 50th year of business, SEI (NASDAQ:SEIC) is a leading global provider of investment processing, investment management, and investment operations solutions that help corporations, financial institutions, financial advisors, and ultra-high-net-worth families create and manage wealth. As of Dec. 31, 2018, through its subsidiaries and partnerships in which the company has a significant interest, SEI manages, advises or administers $884 billion in hedge, private equity, mutual fund and pooled or separately managed assets, including $307 billion in assets under management and $573 billion in client assets under administration.