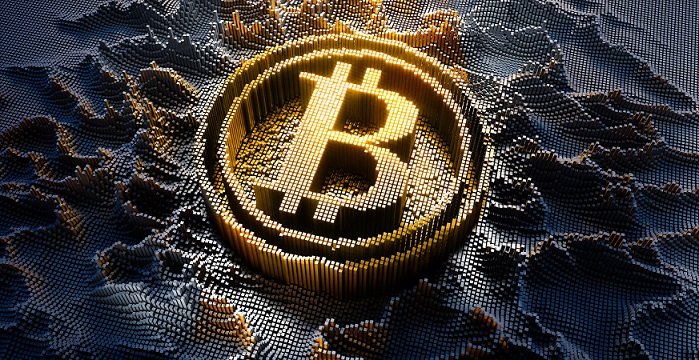 While we have left some things behind in 2020, we’ve seen a continuation of certain trends and fads move with us into the new year. While the darling of Wall Street continues to be SPACs, or special purpose acquisition companies, bitcoin and other cryptocurrencies continue to move higher led by institutions and companies beginning to drink the Kool-Aid.

Tesla announced in early February that it had invested $1.5 billion in bitcoin for “more flexibility to further diversify and maximize returns on our cash”, according to their SEC filings. There has also been speculation surrounding Apple, and potential investment they may make in bitcoin or other cryptocurrencies with their $200 billion cash on hand. The interest in bitcoin and crypto extends beyond the private sector and is starting to bleed into local governments. Miami Mayor Francis Suarez has requested that city commissioners study the use of cryptocurrencies for some of its financial transactions, including employees opting to receive crypto as part of their salary. It’s safe to say that bitcoin, and cryptocurrencies broadly, have some staying power.

Cryptocurrencies, or simply “crypto”, are digital assets that act as alternatives to traditional or fiat currencies (currencies that are issued by governments and not backed by a commodity like gold, but by their ability to tax), like the US Dollar. Bitcoin, the largest and oldest crypto, was created in 2009 and maintains a strong market share of 66%. Notably, that has decreased from 86% just 5 years ago. 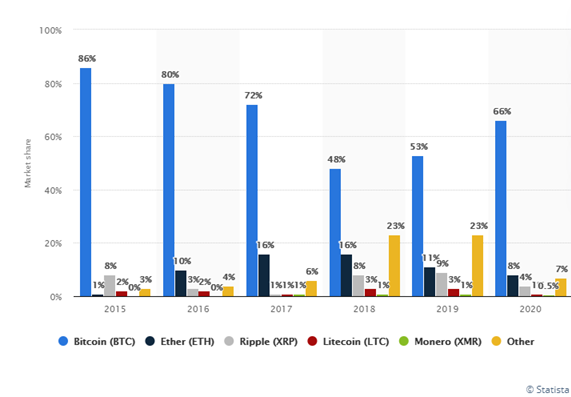 What cryptocurrencies are not?

The typical argument for bitcoin advocates goes something like this: a currency that can’t be manipulated by central banks that belongs to the people and will replace fiat currency, like the USD dollar.

While a noble goal, there are some problems that arise with that argument. Probably the biggest issue is that in order to replace a currency, it has to be accepted within the banking and financial system. It wouldn’t take much for regulatory bodies to ban or severely limit the use of crypto. Effective this past January, the UK banned the use of certain investment products based on crypto. That sets up a little bit of a hurdle for widespread adoption.

Another challenge is that currency typically needs to maintain some measure of stability for practical application. If the price for normal goods and services were wildly changing from day to day, that would probably limit their day-to-day use. Speaking of stability, bitcoin was more volatile in 2020 than stocks in 2008 during the height of the Great Financial Crisis. That doesn’t exactly scream stability. 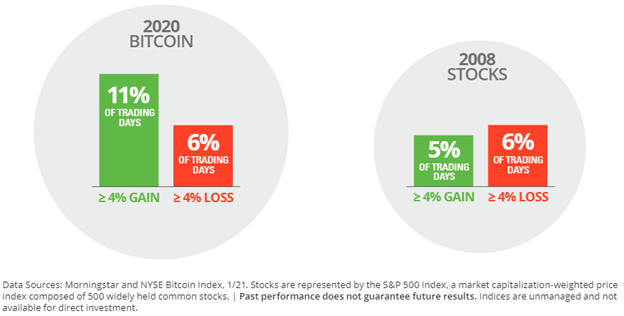 What is our view?

Like any trend or fad investment, there are bound to be a wide range of opinions. It should come as no surprise that Warren Buffet is no fan of the crypto market, referring to it as “rat poison squared.” In fairness, the famed value investor is also not particularly fond of gold either.

Richard Bernstein, of RBA, referred to crypto as Candy Crush, opining that “the only difference between cryptocurrency mining and on-line gains seems to be whether the accumulated coins or tokens are tradeable.”

Here at Stonebridge, we take a softer view and mirrors that of Ray Dalio, founder of Bridgewater Associates, one of the world’s largest hedge funds. The emergency of bitcoin and crypto is a remarkable innovation, but not without significant risks. According to research reported by Bloomberg, approximately 2% of the anonymous ownership accounts that can be tracked on the cryptocurrency’s blockchain control 95% of the digital asset. 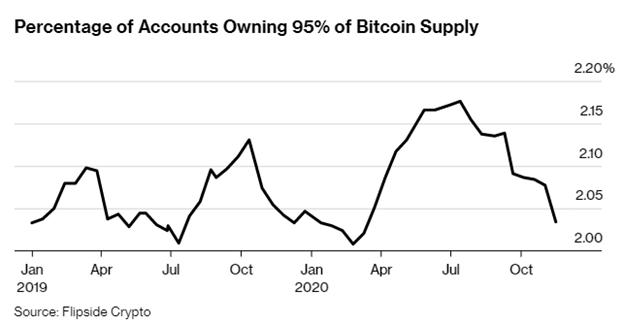 Our concerns surrounding bitcoin are largely driven by security, liquidity, and volatility.

In 2010, Mt. Gox was launched as a Tokyo-based bitcoin exchange. By 2014 it was the world’s largest bitcoin exchange, handling over 70% of the transactions worldwide. In February 2014, Mt. Gox abruptly halted trading, closed their website and exchange, and filed for bankruptcy protection. Mt. Gox would later announce that approximately 850,000 bitcoins belonging to their customers and the company were missing and likely stolen (approximately $46 billion at current valuations). Ironically enough, the biggest risk in front of bitcoin is success itself.

Since the formation of the first central bank, the Bank of England in 1694, governments across the world have committed to controlling money supply for logical reasons. The rise of crypto will be limited based on the tolerance of central banks and on competition. Bitcoin has had the privilege of being first, but that only goes so far. There are nearly 4,300 cryptos listed on Coinbase, one of the more prominent US-based digital currency exchanges. Innovation breeds improvement and it is fair to suggest that a better or more secure crypto could replace bitcoin in the future.

Earlier this year, we presented the case for the emergence of the millennial investor and influence social media is playing on financial markets. On its face, it is easy to suggest that this is a movement into speculation and write off these trades as naivete. But that would ignore the complexities of human behavior and generational nuances. One of my favorite financial columnists puts it this way:

People do crazy things with money but no one is crazy. People from different generations, raised by different parents who earned different incomes and held different values, in different parts of the world, born into different economies, experiencing different job markets with different incentives and difference degrees of luck, learn very different lessons. The person who grew up in poverty thinks about risk and reward in ways the child of a wealthy banker cannot fathom if he tried.

Different economies, different incentives and different lessons leading to different behaviors. Perhaps the rise of crypto is as simple as that. Before wading into crypto waters, you should ask yourself, does this investment have an income stream, earnings, or fit into a broader, longer term plan? If not, it’s probably more speculation than a true investment, and you should proceed with caution.

Before wading into crypto waters, you should ask yourself, does this asset have an income stream, earnings, or fit into a broader, long term plan? Like any other asset class, diversification can reduce risk and improve outcomes. In our view, an allocation to crypto should follow the same disciplined approach.

If you'd like to learn more about Stonebridge's approach to diversified digital asset portfolios, please feel free to reach out.